I’ve been reading the fantastic User Onboarding website a lot lately, and it’s really got me thinking about the initial experience that PrayerMate users have. Anecdotal evidence suggests that people find it quite hard to get over that initial hump of adding all of their prayer points, and until you do, there’s very little to ever bring you back to the app. The result is that the number of active users has never grown nearly as quickly as the number of downloads.

With today’s update to the iOS app, hopefully that’s all about to change. There’s now an official “onboarding” process for new users:

For people who have already used paper prayer lists, the concept of PrayerMate is pretty self-explanatory. But if you’re completely new to the whole idea, it can be a bit hard to get your head around. So step one is simply to explain what on earth PrayerMate is for: 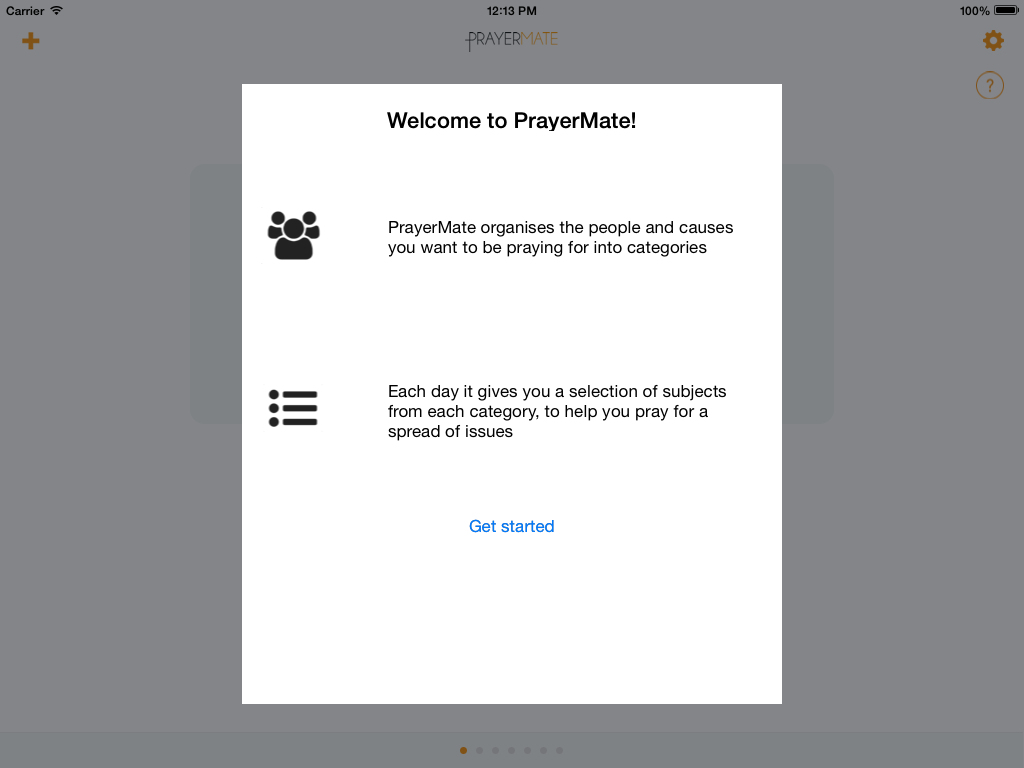 Steps 2 and 3: Creating some initial data

If you can get even a couple of your friends and family into the app, then immediately you’ll be a lot more engaged and find the app more useful. So I’ve added a couple of intro steps that encourage you to type in just a few names under two of the default categories: 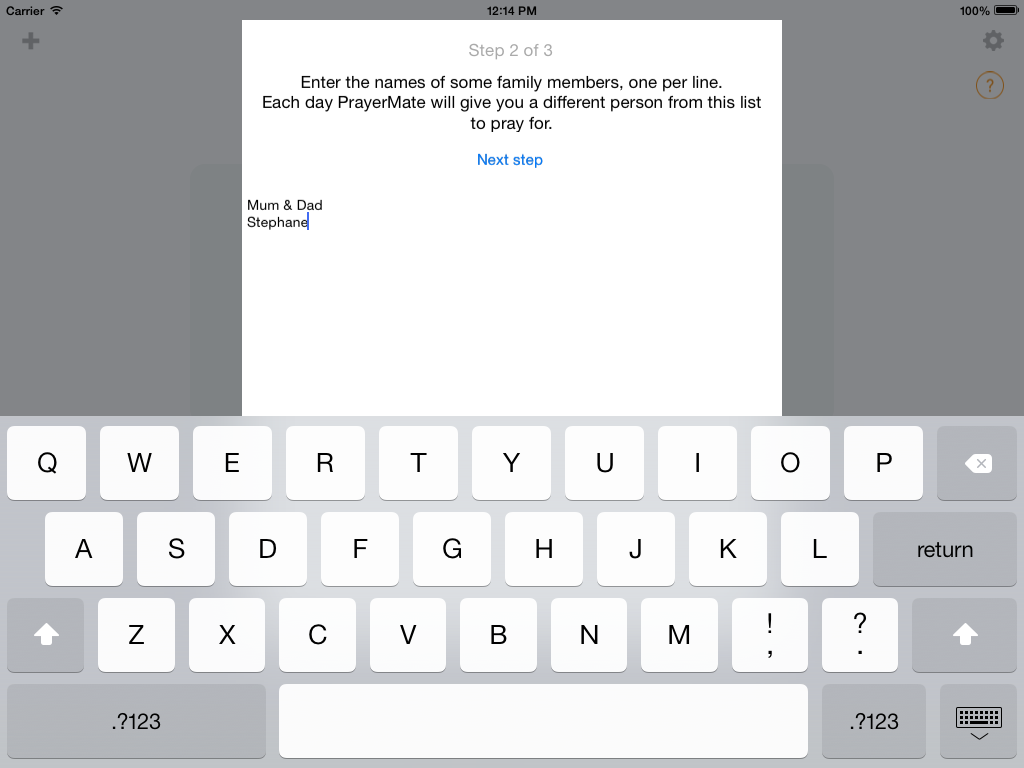 There’s still plenty of room for improvement in the future here, but hopefully this’ll just take the edge off the first run experience and help people grasp the basic concepts of the app a little quicker.

Prayer is one aspect of the Christian life that very often leaves us feeling guilty. We know we don’t pray often enough, and we probably like like we don’t pray widely enough either.

Three years ago I set out to see what I could do to help in this important area. As a software developer, it’s perhaps not surprising that my thoughts turned to ways in which the new crop of mobile devices such as the iPhone & tablet devices could be employed to improve our prayer life. Hence the PrayerMate app was born. By God’s grace it’s come a long way since then, with a host of new features, being downloaded over 17,000 times, being named runner up in the Christian New Media Awards 2013, a successful Kickstarter campaign to fund development of the Android version, and now being sponsored by the Diocese of London as part of their “Pray for Seven” initiative, allowing the app to be offered free of charge to users. Most importantly, it seems to have really been a blessing to many in their desire to pray more – for which I give thanks to God!

Today I am thrilled to announce the next step forward in PrayerMate’s mission to help people pray. Firstly, there’s a HUGE update to the Android version of the app, adding a whole range of features that were previously only available to iOS users. In particular, you can now subscribe to regular prayer updates from over 60 mission organisations and charities, including the likes of Open Doors UK and Australia, UCCF The Christian Unions, London City Mission, the Mothers’ Union, Pioneers, NZCMS, Crosslinks, FIEC, Church Society, Wycliffe Bible Translators UK and USA and many many more. The full list is available here. If you represent a church or charity and would like to see your prayer points added to PrayerMate, I’ve added a little guide here.

Other new features include the ability to archive prayer points you no longer want to pray for and better support for tablet devices. You can also attach any PDF prayer letters that you receive in your email inbox to your subjects, giving you that little extra help to know how to pray for people. Just “Share” your document with PrayerMate, and it’ll let you choose or create a subject to attach it to. 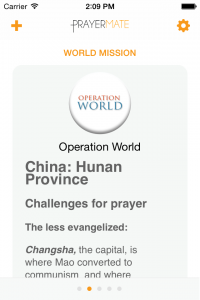 But that wasn’t nearly enough – not wanting iOS users to feel left out, I’ve also got one brand new prayer feed on both platforms that I am bursting with excitement about: you can now get the Operation World country for the day through PrayerMate – completely free of charge! If you’ve not come across it, Operation World is a truly fantastic resource brimming with information on every country in the world and how to pray for it. The country of the day feed is a great way to help you pray for our world, which is something I’m sure we all want to be doing. In time I hope to add individual countries to the prayer gallery too, so that if you have a heart for a particular country you can access prayer points on that too, but that may take a little longer.

Truth be told, I won’t be totally happy until I’ve persuaded Banner of Truth to let me get some prayers from the Valley of Vision into PrayerMate, but one step at a time, right?! Of course, you could always sign the petition to lend a helping hand to my cause.

Oh, and one more thing… I’ve also quietly been working on adding syncing to the iOS version of the app, for those of you with multiple devices. It’s not quite ready for general release yet, but if you’d like to be a beta tester then get in touch and I’ll let you get a sneak preview.

I hope you enjoy these new features. Do tell all your friends to download the app (remember, it’s totally free thanks to the generous sponsorship of the Diocese of London!) and feel free to hit the “Send feedback” button inside the app any time you like if you have problems, questions or suggestions for how to make the app even better. If you’ve not joined the mailing list yet then that’s a great way to keep up to date with the latest news and tips – I tend to post no more than once a month.

Above all, keep praying.

Users of the free PrayerMate mobile app on iOS and Android can enter all of their personal prayer points for friends and family, but they can also subscribe to online feeds from over 100 mission organisations and churches.

If you represent a church or charity and want to get involved, there are three options:

By far and away the best option that will give you the nicest user experience is to sign up for an account on the PrayerMate Publishing Platform. You can schedule prayer points one by one, upload a spreadsheet to do it in bulk, or use the super-clever “Quick import” feature to let you schedule prayer points by copying and pasting from an existing source like a weekly church bulletin or a PDF (video walkthrough here). It can even tweet your prayer points for you each day or post them to Facebook. Once you’ve created your prayer diary, you’ll then be given a private URL / QR code that you can use to subscribe in the app to preview your prayer points and check it’s set up exactly how you want it (look for the “Mobile app” link in the right sidebar of the site). Once you’re happy send me an email to ask to be added to the public feed gallery if you want – or you can keep your feed as a private one for members only.

Option 2: Use an existing iCal feed

If you are already publishing your prayer points in an existing Google Calendar or other system that can produce “iCal” feeds, then you might decide you don’t want the overhead of also maintaining them in a separate system. That’s no problem – iCal feeds can be integrated directly into the PrayerMate system with no additional ongoing admin required. When you’re in the mobile app, there’s a page where you can submit details of your organisation and request to be added to the prayer gallery – use this and simply send me a link to your iCal feed, a bit of blurb about your organisation and a logo image (ideally, a square one). It probably works best if they’re all-day events with a title. If you also use the notes field then please mention this when you get in touch. Please note that this option is only for EXISTING calendar feeds – please do not create one specifically for use in PrayerMate.

Option 3: Use an existing RSS feed

If you already have your prayer points in an RSS feed, the PrayerMate system can also use these, although it’s not as ideal as a calendar. Again, hit the button in the app to submit details of your feed, along with blurb about who you are, your website, etc. and a link to the feed. Please note that this option is only for EXISTING RSS feeds – please do not create one specifically for use in PrayerMate.

How much does it cost?

Now that PrayerMate is a free app for users to download, my main source of financial income to support the flourishing of PrayerMate is from organisations who are represented within the feed gallery. The PrayerMate publishing platform has packages to suit different kinds of organisations – with a £5 per month package for medium sized churches and a £20 per month package for larger organisations. There’s plenty of flexibility in this if the prices put you off, but the income helps make a better app which in turn hopefully leads to more people using it to pray. For the iCal / RSS route, still sign up to the PrayerMate.net site, but for now you’ll then have to email me separately to get set up.

Today I am pleased to announce a new PrayerMate sponsor, the Diocese of London. As part of their “Capital Vision 2020″ programme, the Diocese is encouraging people to commit to praying regularly for seven people, for an opportunity to share the story of our faith. PrayerMate seemed like such a good fit as something that could help people in this that it seemed like a great opportunity.

Thanks to the Diocese’s sponsorship, PrayerMate will continue to be available free of charge until the end of June 2014. 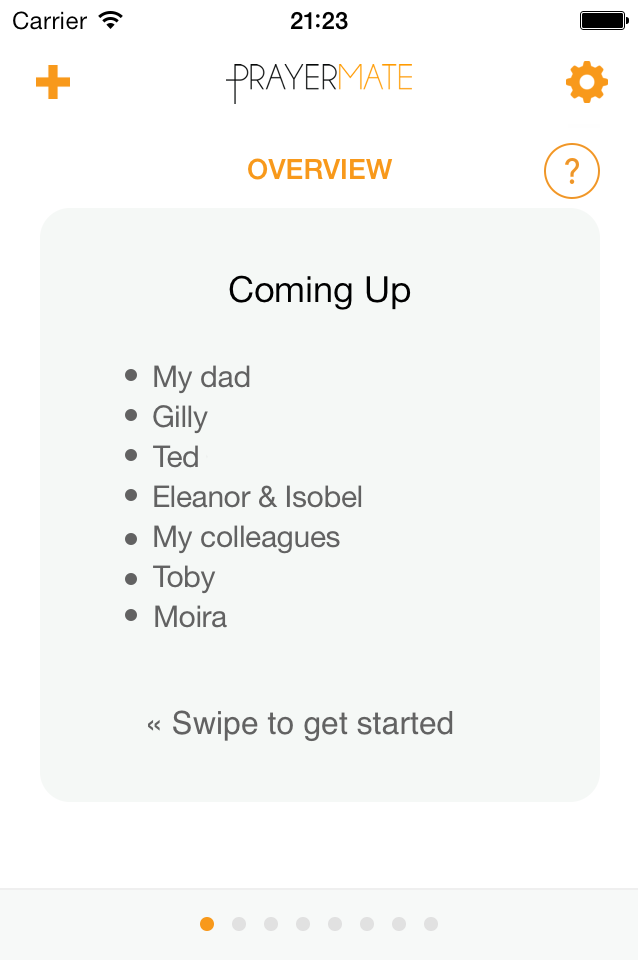