In case you missed the news yesterday, there is now an all-new version of PrayerMate. Judging by the emails in my inbox, this update has caused a great deal of confusion and anxiety amongst many of you, and I hope that this post will help clear some of that up. I would also like to apologise if the changes have come as something of a surprise, and for not communicating better how to deal with the changes in advance.

Here are some brief notes about the new scheduling and how to deal with it:

1. Firstly, the new scheduler centres around a single total number of items that you wish to pray for, and then selects cards roughly in order of priority until it meets that quota. This is what the new +/- buttons on the first “Coming up” slide are about – it defaults to five but for many of you you will be used to seeing more, and should just press the + button until you are back to a number that suits you.

2. The caveat to point 1 is that it does also try to balance things between your various lists (formerly known as categories), so by default it should only ever pick one card from each list until it has run out of lists, at which point it will circle round once again.

3. For those who want more control, you can explicitly tell PrayerMate how many items you want from any given list, and it will then prioritise those lists before filling up the rest of its quota from elsewhere. Tap on to the new “Lists” page using the button (at the top on iOS and at the bottom on Android) go to the list you want to manage (either by selecting from the “List index” or by swiping sideways) and then press the “cog”/ settings button on that list and choose “List settings”. There you can tick “Manually set items per session” and drag the slider. For example, I have this set to “1” on my “Biblical prayers” list to make sure that I always start my prayer session by focussing on God, and I have one item from lists for my wife and for my children, but then I leave PrayerMate to decide how to fill up the rest of my daily quota from all of my remaining lists (of which I have many).

4. I’m hoping to add an explicit “pray for this every time” setting very soon (a somewhat obvious feature that PrayerMate has never had, because before this update it was too hard to figure out all the complicated interactions with per-category limits / the global limit / etc). In the mean time, as demonstrated in point 3, I suggest moving that subject to a list all by itself and manually setting the items per session on that list to “1”.

6. Finally, can I share an email that really encouraged me, that gives you a feel for the motivations behind these changes? This lady said “I did not use the app before because it was so hard to use, but since this update it is much better!” I cannot deny that this recent update requires something of a transition, and *especially* from users who have invested time to setting it all up and who have discovered some of these “power-user” settings such as the per-category item limits. Sadly, for every one of them, there are probably dozens more who never even discovered that those settings existed, but the mere fact that they *did* exist created complexity and confusion for them. I definitely accept that I could and should have communicated better in advance about these changes, but I want you to know that the time and energy you are having to invest to adapt to these changes is an act of service to the wider body of believers.

If you’re not already signed up to the PrayerMate newsletter, do hit the button inside the app to do so. That’s the best way to be kept abreast of any important changes or PrayerMate news.

Many thanks for your support and for all of you who have been passionate enough to email me!

The first version of the PrayerMate app was built almost five years ago, when I set out to create something to help people pray more faithfully. Since the Code for the Kingdom Hackathon weekend back at the start of October, I’ve been working on totally overhauling it to try to make it easier to understand and use. It’s been a long journey, but I’m delighted to announce that it is finally ready! 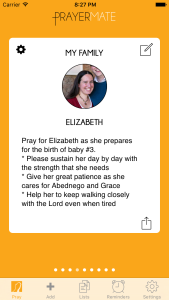 The app has a new layout, with each of the main functions occupying its own tab. I’ve also changed how you edit cards, to make the process much more visual: now you can press the edit button on any card to change the name or description, add a photo or PDF attachment, or move it to a different list.

Many thanks to Nick Muncey for his fantastic new design. 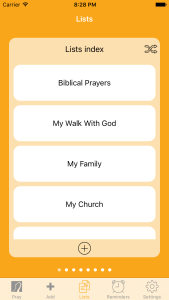 Categories have now been renamed to lists. The new lists page lets you see all of your subjects on one page (on a tablet this is even more useful). You can create new lists, or add subjects to your existing lists.

The way that PrayerMate decides what you should pray for each time has been completely rewritten. Instead of having lots of per-category settings, there is now just one global setting for how many items you want to pray for in total – press “+” to ask for more, or “-” to ask for fewer. For those of you who want a bit more control, you can still go in to the settings for a particular list and manually set the number of subjects you want to see from that list each time.
Update: I’ve written a detailed migration guide here about how the new scheduler works

Take Words With You prayer builder

Some of you may have previously tried the TWWY prayer builder with mixed results. This has been simplified, to focus on just the two core steps: praying scripture promises, and praying scripture prayers. Once you have chosen a Bible verse from each section, PrayerMate will then add the results to your existing card, rather than replacing (as it used to).
Please note that sadly there is a little bug in the iOS version, and no “Select” button appears after you first tap into a Bible verse. Swipe right then left again to make it appear. 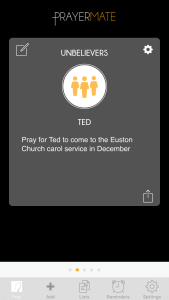 Lots of people have expressed an interest in a “dark mode” for when praying at night, and I’m pleased to say that this is now available under the “Settings” page (along with a few other colour themes).

Finally, let me mention one last new feature: the option to become a PrayerMate Patron (iOS and Google Play only). PrayerMate has always developed more slowly than I would have liked, and this is mostly because it’s just me working on PrayerMate in my spare time, with a bit of help from some outsourcers. I’d love for a developer to be able to work on the app full time, and by becoming a Patron, you can help make this happen.

Anyway, I hope you enjoy the changes, and please feel free to hit the “Send feedback” button inside the app at any time. There’s bound to be a few bugs and teething trouble (big shout out to all my amazing beta testers for their help finding plenty so far!) so do let me know if you find any.

You can download the PrayerMate app for free on iOS, Android and Amazon Kindle Fire.

What better reminder to have sitting on your desk at work that a PrayerMate “Time to pray?” mug. Or what could be a better way to focus your morning than having Philippians 4:6 ringing in your mind over breakfast?

Get your PrayerMate mug now and a small percentage of each sale will go towards helping fund future development of the app too! 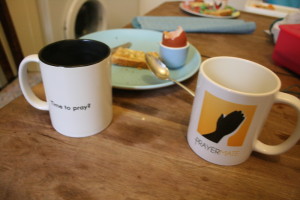 The Gospel Coalition Australia has very kindly given permission for some daily prayers by Peter Adam (recently published on their blog) to be made available through the PrayerMate app.

In Peter Adam’s own words:

“These are prayers which enlarge and enrich my praying, and which I need to pray every day…
You may not need to pray these particular prayers, but these prayers may encourage you to write the prayers you need to pray, if you find this practice helpful.
…
This is not a superior way to pray: it is currently a useful aid to my prayers.”

You can find them under the “Personal Godliness” prayer gallery, or you can try using this direct link if you have the app installed.