For as long as I can remember, I’ve always had two great loves: Jesus, and computers. My journey has been one of learning how to combine those two great loves, culminating in the creation of the PrayerMate app, which now helps over 30,000 active users every month to pray, and the founding of the UK charity Discipleship Tech to support that mission.

Since I was about five years old, I’ve always known I wanted to be a software developer (except we called them “computer programmers” in those days). I quickly learnt to start copying the code out of BBC Micro Magazines that my Dad would then spend countless hours patiently correcting for me – it was thrilling to see various games and things come to life! Danger Dog (shown below) was the one I most vividly remember – probably a terrible game in retrospect but seeing how these simple lines of text could turn into this incredibly complex experience was mind-blowing to a seven year old!

Eventually my Dad bought me a subscription to Let’s Compute! magazine – a magazine aimed at teaching children how to code. Probably no surprises in retrospect that it went bust after just twelve issues – but it was enough to get me hooked.

I also have my Dad to thank for showing me from the offset how my Christian faith and my love for computers could be combined. He created a series of computer animated films based on various Bible stories, titled Bible Story Graphics, starting with Zacchaeus Meets Jesus, and including the Christmas Story. They were something of a labour of love for my Dad, roping in the entire family in different ways (lots of us contributed voices, and my teenaged sister wrote the music for them). They ended up being published by the Bible Society.

As a student in Cambridge, my faith, which had always been an important part of my life, really began to grow as I received so much clear Bible teaching, both through involvement in the CICCU and at St Andrew the Great church. It was then that I first felt the desire to do something where I could be directly serving God, and ended up doing a church apprenticeship down in Fowey, Cornwall. It was an incredible year where I learnt so much about myself and about Jesus (not to mention falling in love with Cornwall!) but at the end it was unanimously agreed that I should go and find a job as a software developer for a while, rather than immediately exploring full-time church ministry.

Thus began a long period of wrestling – I absolutely loved being a software developer, working first at a large newspaper company, then a VFX movie company, a small Christian charity and finally at a food delivery company. But at the same time I could never quite shake off this feeling that I wanted to do something more directly gospel-focussed. That was part of the reason I worked a four day week for a lot of my early career as I tried (unsuccessfully, at the time) to create an Old Testament adventure game.

It was at the Christian charity that I had the opportunity to explore how my two “callings” might connect more deeply, studying part time on the Cornhill Training Course in London. As well as being where I met my wonderful wife, that was when I first created the PrayerMate app (which was incredibly simple by comparison in those days – see the video below!) I was playing around with my first ever iPad and it seemed to me that it would be the perfect format for reading people’s missionary prayer letters – rather than them sitting unread in my email inbox, I imagined some kind of automatic prayer list which could suggest who to pray for each day, but then also show me their latest prayer updates so that I could know how to pray for them as well. It took me about 7 years to get to the point where PrayerMate could do that but the idea was born!

I ended up continuing as a software developer for another four and a half years at the startup Hubbub, for which I am so thankful. The people I met and the skills I learnt were such a blessing to me, and PrayerMate would certainly never have become what it is today were it not for that experience.

By the time PrayerMate had reached its first 100,000 downloads, it was becoming increasingly clear that it deserved a lot more of my time and attention than I was able to give to it as a side-project alongside a full time job at Hubbub. And yet with a wife and a growing family there was no obvious way that I could afford to just give up the day job and focus on PrayerMate (if you become a millionaire by running a prayer app then I’m fairly sure you’re doing it wrong). Elise and I prayed about it and talked about it on and off for a good year or so, before eventually on a date night we did a bit of a back-of-the-napkin calculation and came up with a plan whereby perhaps we could afford to take the plunge. I went to my boss and said “something has to change” – fully intending to hand in my notice.

Unfortunately for me, my sense of loyalty got the better of me. Hubbub was at a crucial stage of trying to fund-raise, and with such a small development team with no formal senior developer, they asked me if I was willing to stay on for an extra few months until the fund-raising was complete. They had two offers on the table that they were deciding between, and it seemed like it should all be finalised fairly soon. It felt like the right thing to do, and I agreed.

But the next week, the only developer who had been on the team longer than I had went ahead and handed in his notice. At the time that made me chuckle. Then, before he had completed his one month notice period, the remaining backend developer handed in his notice. I wasn’t chuckling any more. I will be honest, that felt like a real punch in the gut. I remember firing out some kind of email asking people to pray for my faith in that moment. I was left asking “God, what are you doing??” – had I been a complete chump to agree to stay when seemingly nobody else felt any such sense of loyalty? As the only remaining backend developer it felt like even the snatches of unpaid leave I’d been permitted to take each month to work on PrayerMate might be taken away from me.

But it didn’t take long to find the answer to my question. Before that second developer had completed his notice period, the whole team was summoned in to the meeting room. “We’re about to find out which of the offers they’ve decided to accept!”, I thought to myself. Instead, we were informed that not just one but both deals had fallen through at the eleventh hour, and at such short notice there was no alternative but to make the entire company redundant (which, I should add, is a credit to the honesty and integrity of the leadership, who wanted to do everything right rather than leaving people out of pocket or continue working when there was no means to pay them their due).

The news brought with it such a wave of conflicted emotions. On the one hand, it was utterly heartbreaking – all of us had poured so much of our heart and soul into that company, and for those of us who used Hubbub for our weekly shopping, we loved it so much! It was such a stressful time for everybody as people scrambled to work out what was next, and over the following months we ended up saying goodbye to wave after wave (with so many different people on different notice periods, it felt like there was a new leaving party every other week!)

But of course, for me, on the other hand came this great sense of relief, that finally here was my opportunity to walk away without any sense of guilt – and what’s more, with a very welcome redundancy payment in the bank by way of seed funding.

When I told the PrayerMate community that I was stepping out and trying it full time, the response was overwhelming. I will be eternally grateful for the generosity of so many who stepped up and donated and prayed and generally encouraged me in my new mission. When I started I had enough funds for me to do it for about six months – and four years later, here I am still doing it, and having had a second developer full time for two of those years as well! God is so good and it has been an amazing journey. It has enabled PrayerMate to grow closer to that original vision of the app I hoped it might be, and as it approaches its 10 year anniversary it’s been downloaded getting on for half a million times and supports over 1.6 million prayers every single month which I find just mind-blowing – just think what God is doing in response to all of those prayers!

What’s also exciting is that PrayerMate itself is just the beginning. We’ve recently launched the Redeeming Time app to help people reset their relationship with their phone, and turn some of those spare minutes that might have been frittered away on social media to instead feed on God’s word. In the new year we’ll be launching a new “Easter Experience” project for school kids in partnership with UK charity CrossTeach, and I’ve also finally gone back to my roots to explore again the idea of a Bible-based mobile game. 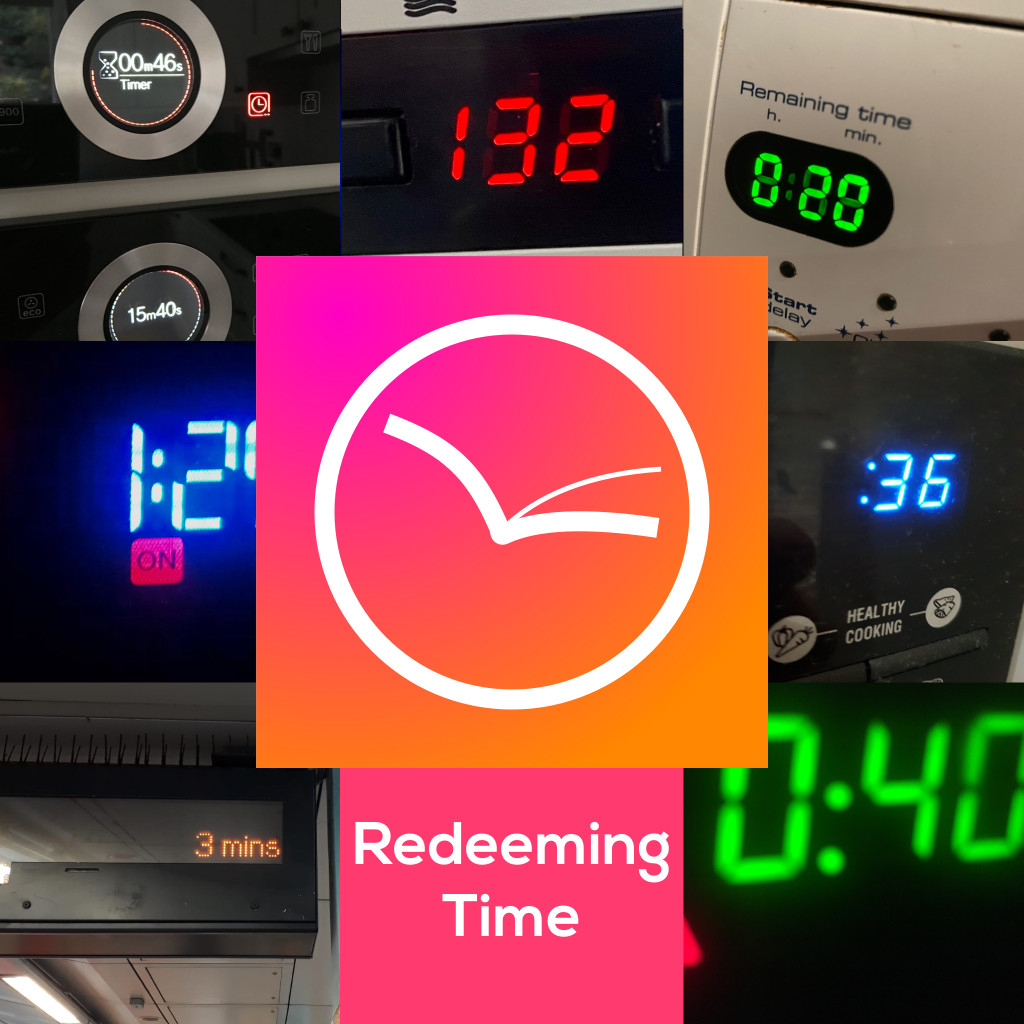 Join me on my journey

If you’ve made it this far, perhaps something of what I’ve said has struck a chord. The reality is that it’s actually been throughout that whole journey that I’ve been using my software skills to serve Jesus, not just the last few years – whether it was at the newspaper company, the VFX company, at Hubbub or when working for a Christian charity. There isn’t some sharp dividing line between “serving Jesus” and “writing code”. And yet, for me, there has been no greater privilege than getting to work full time directly using my skills to serve the gospel as I work on PrayerMate and other similar projects. It’s one of the things that makes Kingdom Code BUILD so fun every year!

If you are a follower of Jesus, I hope that you will be encouraged to continue serving him with your gifts and talents wherever you find yourself.

God has been so faithful to me through all of this, and I am excited about what lies ahead (currently, for me, a Bible Overview mobile game experience). I would love you to pray for me and the Discipleship Tech team in the coming year! You can subscribe to the email newsletter here to stay informed.