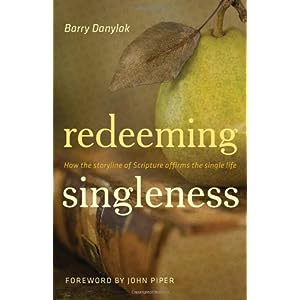 At Euston Church we recently had a provocative Sunday sermon series from 1 Corinthian 7 by Charlie Skrine listening to what God says about marriage and singleness. It’s one of those subjects that everybody has an interest in, and also one of those chapters of the Bible that everybody has a different opinion on how to interpret. Yet however ambiguous some aspects of Paul’s teaching may be, it’s hard not to agree that at the very least Paul sets forth a radically positive view of singleness. In a sex-obsessed culture which pretty much assumes it’s a fundamental human right to fall in love and pursue a fulfilling sexual relationship with that person, whoever they might be and whatever your situations, the idea of being content to accept a single lifestyle and refrain from marriage just seems bizarre.

On the back of that sermon series, I decided to read Redeeming Singleness by Barry Danylak. It’s a Biblical theology of singleness, tracing the theme through the Bible timeline and showing how the idea is developed over time, and how it’s affected by the coming of Christ. It consists of six chapters, each of which I managed to read in a single sitting, making it quite achievable to read the whole book in a week. Starting with the book of Genesis he shows how the promises of the Abrahamic covenant with their emphasis on offspring play out in the rest of the Old Testament. He does a tour of the prophets, then shows how things are changed by Jesus’ arrival, and what Jesus himself taught on the subject. He then ends up with a look at 1 Corinthians 7 itself.

I particularly enjoyed his overview of the theme of ‘offspring’ within Isaiah, and how with the coming of the Suffering Servant there’s going to be a fundamental shift in how people become part of God’s family: now the children of the barren woman will be more than the children of she who is married (Is 54:1), and to the eunuch who chooses the things that please God will be given a name that is better than sons and daughters (Is 56:5). It’s not just that their reproach is taken away, but their situation is in fact better than those who simply have large earthly families.

He also uses the example of Daniel (for whom he presents evidence that he was probably made a eunuch in Babylon) to paint a truly compelling picture of the eunuch as the king’s loyal servant – without any chance of a dynasty of his own he poses no threat to the king, and also without children to look after him in his old age he is entirely dependent upon the king’s ongoing support and hence his own welfare is wrapped up in the welfare of the king – and so he faithfully serves his king undistracted by family concerns. The only question in Daniel’s case is which king is he serving – when the rubber really hits the road it turns out that it’s not King Nebuchadnezzar after all but the King of Heaven.

You can tell that the book is written by an academic and at times you have to do a bit of the work yourself in figuring out why the things he’s teaching you are so encouraging for daily living as a single person, yet at the same time he writes from personal experience as a single person himself, and you can tell that these are truths that matter to him. All in all it was a very helpful read that has done me a lot of good, and I highly recommend it.