There are more than enough books in the world on the subject of marriage. Every man and his dog wants to have an opinion on the subject. One of the features of being engaged is that now suddenly you own a large number of those books, as everybody scrambles to buy you a copy of their favourite (thanks everybody! I really am grateful, honest!)

One of those books that really stands out for me is This Momentary Marriage by John Piper. As you might expect, Piper holds a very high view of marriage, and paints a Biblical vision of just how glorious marriage as God designed it should be. But one of the distinguishing features of this book is the equally high view of singleness you’ll find in it.

Piper’s main premise is that marriage is not the ultimate, it’s not the thing that’s going to solve all our problems and make us happy and fulfilled. It’s a glorious thing, yes, and it holds a special place in God’s purposes for displaying his glory, but it’s only ever a temporary thing that will not exist in the New Creation. Just as the relationship between a husband and his wife is a tangible illustration of the relationship between Jesus Christ and his church, happily-single Christians are a tangible illustration of the sufficiency of Jesus and the final state all who trust in him are heading towards. So at the same time as giving us a higher view of marriage, it also stops us making it the very highest thing in our thoughts, helping us keep first things first rather than drifting into idolatry.

Most books on marriage claim to be suitable for all kinds of people: people already married, people about to be married, and people vaguely thinking about marriage in the future. But in my experience, it’s rare to find a marriage book that I would genuinely want to recommend to a single friend for fear of making them feel a little bit sad – I know that I’ve often read stuff about marriage in the past and just been made to feel like I was missing out on something. This book bucks the trend. It reminds all of us, single or married, that as Christians we have a relationship with the Creator of the Universe that’s going to last for eternity, and that that ought to excite us more than any human relationship.

Of course Piper also explores the usual practicalities of marriage: the purpose and place of sex, the Biblical view of gender roles, brining up children, and so on. He does so in a way that gets you excited about serving God in whatever situation you’re currently in, with the gifts and personality God has given you. I found the chapter on hospitality especially helpful: Piper says what a shame it is that often married and single people in the church end up being segregated, when there’s so much potential for good if single people were to show hospitality to married people and if married people were to show hospitality to single people.

If you’re a Christian, whether you’re married or not, be excited that there’s someone in your life who knows you better than you know yourself, and who loves you enough to die for you – and we get to go and spend the rest of eternity in intimate relationship with him! Everything else is just temporary, but our relationship with God lasts forever.

Related posts: My review of ‘Redeeming Singleness’ by Barry Danylak – which is the basis for Piper’s chapter on singleness in ‘This Momentary Marriage’. It’s helpful stuff for single people wondering about their place in the church. 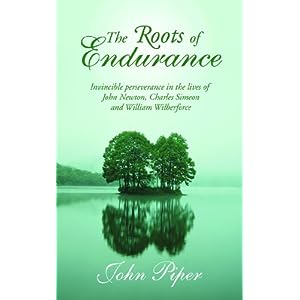 Over Christmas I had a bout of man-flu and bravely put myself to bed for a few days. It turned out to be really good for my soul, since I was tucked up with a copy of John Piper’s heartwarming book “The Roots of Endurance: Invincible perseverance in the lives of John Newton, Charles Simeon and William Wilberforce”. Piper takes these three spiritual heroes from the 18th-19th century whose lives were at least loosely intertwined, three characters who were especially marked by perseverance: John Newton was a pastor in Olney and London for forty three years; Charles Simeon was minister at Holy Trinity church in Cambridge for fifty four years, during the first twelve of which he sustained incredible opposition from the wealthy and influential “pew holders” of the church but who ultimately could not be swerved from getting on with his job of teaching the whole counsel of God from the Bible; and William Wilberforce campaigned for the abolition of the slave trade almost from the age of 21, when he first became a Member of Parliament, to the year before his death, a total of almost forty six years during which the movement was defeated no less than eleven times in parliament. Piper’s aim is to get under their skin and examine exactly how they persevered in the face of such pressure, and what motivated their devoted service of the cause of Christ over all those years, and it should come as no surprise that ultimately it was their joy in a deep, personal relationship with Jesus himself.

I’m not afraid to admit that one of the things I loved most about this book was its length: at only 166 pages in total it needn’t take you forever to read it. It basically just has one chapter for each man, plus an introduction and an epilogue, and each chapter is easily read in a single sitting. They’re obviously not the most in-depth biographies you’re ever going to read, but in many ways Piper isn’t so concerned with the bare facts about their lives as he is in the underlying theology and practice that made them tick, so there’s still probably something to be gained here even by those who are fairly familiar with the characters involved. It might also be worth mentioning that of course these three men were all English, and John Piper is both American and writing to a predominantly American audience, which might have been a recipe for frustration for English readers like myself, but in the end I hardly noticed it.

I found reading the book to be really refreshing and encouraging in my Christian life. The essence of Piper’s analysis is that all three men knew exactly how much they’d been forgiven by Christ, and they reminded themselves of that fact daily. They didn’t shy away from shining the lamp of God’s word into every dark corner of their lives and naming sin as sin. Simeon in particular didn’t equate living by grace as being the same as “feeling good about yourself” – he looked rather to the model of passages like Ezekiel 36 where God says that in the day where He will wash his people’s sins away they will loathe themselves for the way they’ve treated God. Knowing how little they deserved produced a real gospel joy in the fact that God graciously accepted them as his children through the merits of Jesus’ life and death, which in turn motivated them to press on in faithful service.

In summary: read this book. Especially if you find yourself flagging in the Christian life and start wondering how you’re ever going to keep going. God is a faithful God, and it turns out that it’s not really about us at all, but about what Christ has done and how we can enter into that.