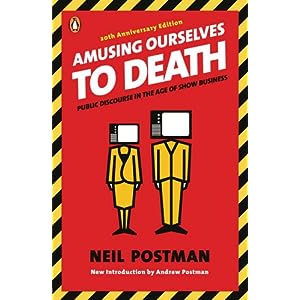 Every now and again you find yourself coming across a particular book being mentioned over and over again in various different settings, until you eventually succumb and go out and read it. One such book that I’ve just reached the end of is Neil Postman’s “Amusing Ourselves To Death“. Originally released in 1985, it’s a treatise on how television affects the way we think as a culture, and particularly on how we engage with and discuss important subjects like politics, religion and education.

It opens with a compelling comparison of two grim predictions of the future made in the mid 20th century: those of George Orwell in his book 1984, and Aldous Huxley in his book Brave New World. Here’s a little snippet:

“Contrary to common belief even among the educated, Huxley and Orwell did not prophesy the same thing. Orwell warns that we will be overcome by an externally imposed oppression. But in Huxley’s vision, no Big Brother is required to deprive people of their autonomy, maturity and history. As he saw it, people will come to love their oppression, to adore the technologies that undo their capacities to think. What Orwell feared were those who would ban books. What Huxley feared was that there would be no reason to ban a book, for there would be no one who wanted to read one. Orwell feared those who would deprive us of information. Huxley feared those who would give us so much that we would be reduced to passivity and egoism. Orwell feared that the truth would be concealed from us. Huxley feared that the truth would be drowned in a sea of irrelevance.”

Postman then goes on to argue that Huxley’s fears were well-grounded, and that the age of the television has, to a large degree, brought them to pass. His argument is essentially that the medium used to communicate information always shapes how that message is received and understood. Just as the invention of the printing press created a culture dominated by “typographic thinking”, where sustained and reasoned arguments prevail and the aim is to establish the veracity of a particular truth claim, so the invention of the telegram and then television has ushered in a new era of show business where entertainment is king and truth is irrelevant. Commercials for products today rarely spend much time setting forth actual arguments related to their product for why it’s worth your money; instead they focus on you, the viewer, and seek to make you recognise what your life is missing – what void their product can supposedly gratify.

Lots of the illustrations Postman uses are fairly dated and also from a US context, and I generally didn’t recognise the names of the particular TV stars he was referencing. But I think the actual arguments he makes are more relevant than ever, and are as true of the internet as they are of television, if not more so. Two points in particular really stood out for me:

Is Neil Postman just a grumpy old curmudgeon? I don’t know. Maybe he does overstate his case at times. But I think his aim is simply to make people aware of the effects of television and not to be blind to them, and in that I think he definitely succeeds. There’s a lot of great food for thought, and being more aware of the quality of the air you’re breathing can’t be a bad thing.