Do you ever get that feeling that you’ve been doing something for years, but are still only just beginning to figure out what you’re really supposed to be doing? I’ve been feeling a bit like that with PrayerMate for a while now. It’s grown considerably over the past year or so, both in terms of features and in terms of the number of people using it and the number of organisations publishing their prayer points through it (over 80 now!) One of the downsides of doing something as a side-project, and being massively overworked, is that you don’t always get to invest the amount of time as you would like just polishing the little details.

I think over the years I’ve been lulled into a false sense of security by all the positive encouragement I’ve received from people about PrayerMate, when the truth is that there’s lots about it that could be better. The truth is that the positive encouragement all comes from people who have managed to figure it out and have started using it, whereas the negative feedback comes in the form of silence from the people who downloaded it, tried it once, couldn’t really figure out what it was for or how to get going with it, and then never came back to it ever again. It’s only very rarely that you get emails from those people, so it’s easy to miss just how many of them there are.

This last month or so I decided that enough was enough, and whilst my wonderful iOS beta testers have been trying out the new (as-yet-unreleased) syncing functionality, I’ve been taking a break from that brain-melting hardcore coding kind of work to tinker with the basic interface to try to improve the useability of the app, especially for brand new users. I’m still only really half-way through my list of ideas (with some of the more dramatic changes still to come!) and I haven’t yet had a chance to port these over to Android, but I thought I’d give you a little taste of what’s coming up when Apple approves the next release.

I did a little experiment with a new onboarding process back at Easter, but for various reasons I don’t think it hasn’t proved too successful. Instead I’ve opted for more of a light touch approach. The user’s first session now starts and ends with these two pages: 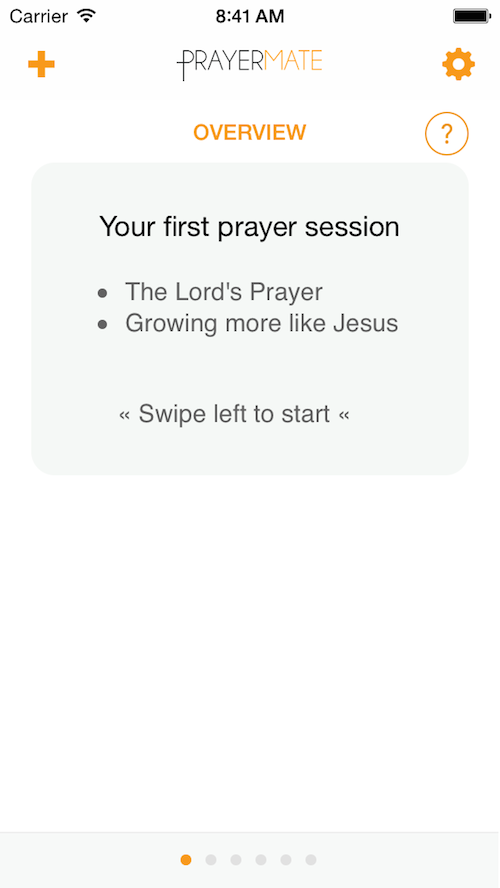 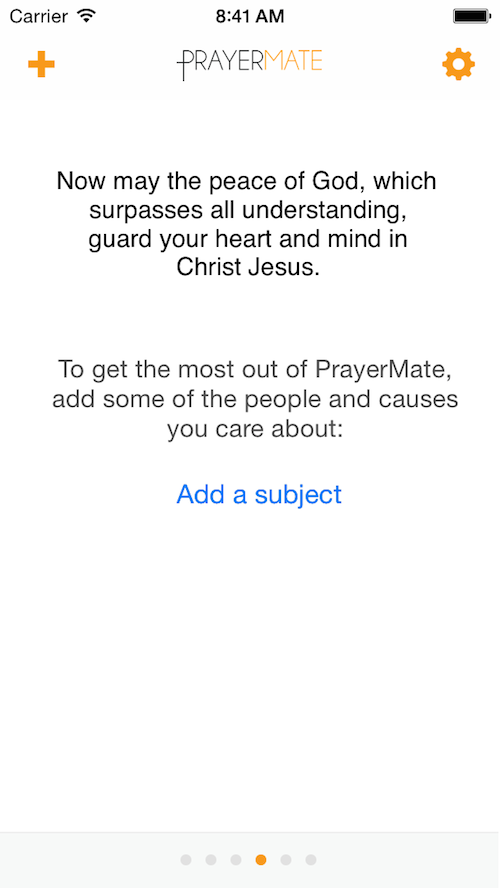 The first page introduces some vocabulary (“My first prayer session”) and now gives a more explicit call to action (“Swipe left to start”). The last page urges people towards the key value-add action: adding your own subjects to pray for.

That leads nicely onto the next big change, which is a totally revamped process for adding new subjects. Over time the subject settings page has become a slightly overwhelming and scary mess of options and features, and from the very earliest days I know people have struggled how to do even the most basic task of adding a new subject. Taking the approach that people basically want to focus on one thing at a time, PrayerMate will now hold your hand a little bit more through the process. 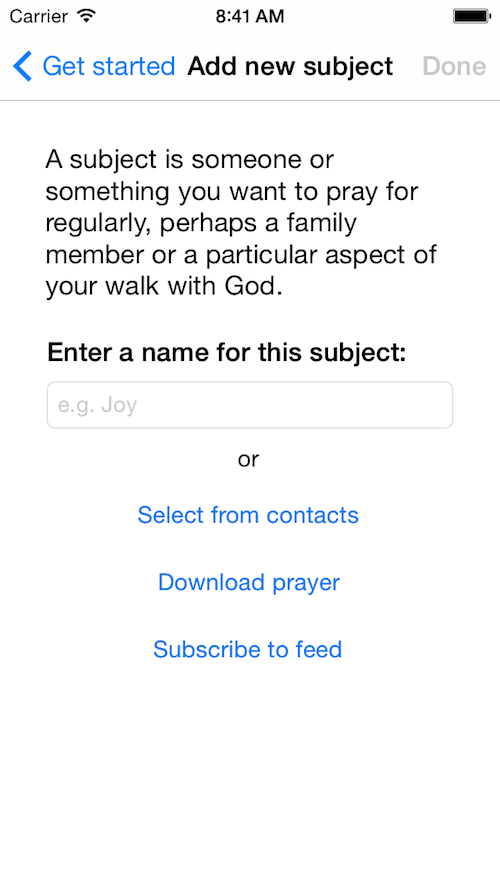 Historically there’s also been a bit of a discovery problem: people didn’t know that the feature existed to download prayers or subscribe to online feeds, so the new “Add subject” page is the perfect place to direct people towards these alternative ways of getting new content into the app.

When choosing the scheduling mode for a subject, you now get a very brief explanation of what each option means: 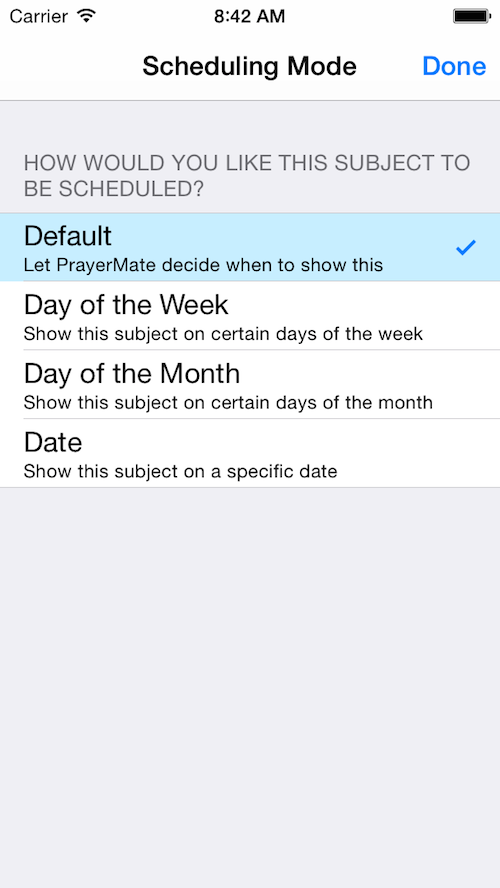 Although previously there was a gallery of Bible verses that would make for good prayers, for copyright reasons I was unable to make the text of those verses available for download directly into PrayerMate. Instead it took you to BibleGateway in your browser, from where you could copy and paste into PrayerMate. For various reasons, this really sucked. Mark Strivens has donated a huge amount of time to contact various Bible publishers and has managed to secure permission for me to include extracts directly from the NET Bible translation. He’s then set it all up, so now if you want to download a Bible prayer the text is right there and you just have to hit a button to turn it into a subject in PrayerMate.

This one was sheer laziness on my part when I first added the prayer gallery: it’s been obvious all along that there needed to be a quick way to download a whole bunch of prayers all in one go. So now if you’re a wife wanting to pray for your husband, you can open up Jen Thorn’s “Seven hard things to pray for your husband” and download all seven with the touch of a button. 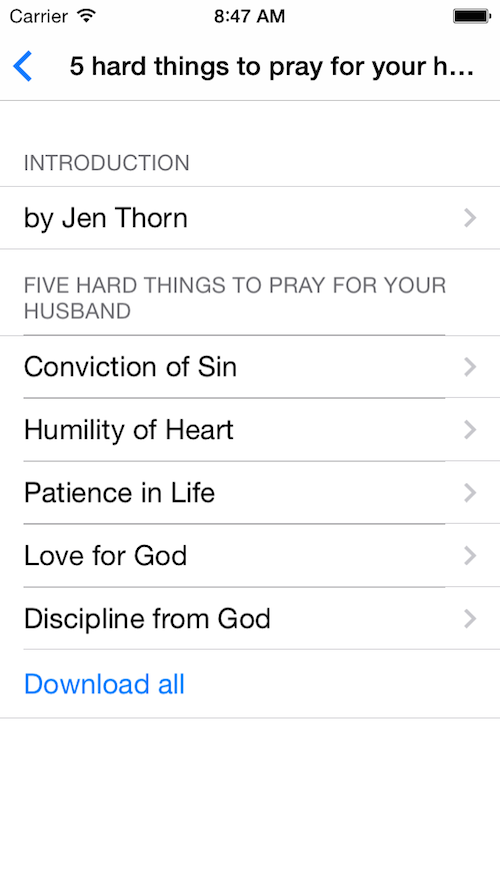 Changes to how feeds work

When I first added online feeds to the app last year, I had an inkling that people would love it, but I didn’t really know what it was that I was making. As people have started using it, and as more and more organisations have come on board, it was inevitable that there would be some changes required. The Android app benefitted from this hindsight and got built properly the first time around, but now iOS is catching up. The biggest change I’ve made is that feed subjects are now scheduled just like any other kind of subject – so I could say “I want to pray for Tearfund on Wednesdays and UCCF on Mondays”, and feed subjects no longer receive priority in the way that they used to, making it a bit easier to have several subjects all in the same category.

I’ve also tweaked the lingo when you first subscribe to a feed, so that instead of confusingly saying “View prayers” it now makes it more obvious that a new subject has been created for you. There’s also a little indicator of how often a particular feed is likely to be updated (daily, weekly or monthly) 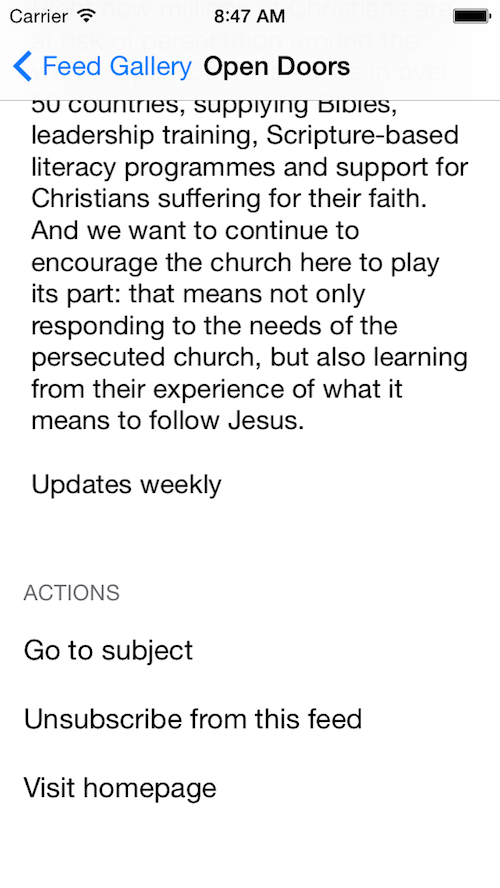 When viewing your feed subject, I’ve also broken out the upcoming prayers into a separate “feed items” page, making the subject page a bit more manageable: 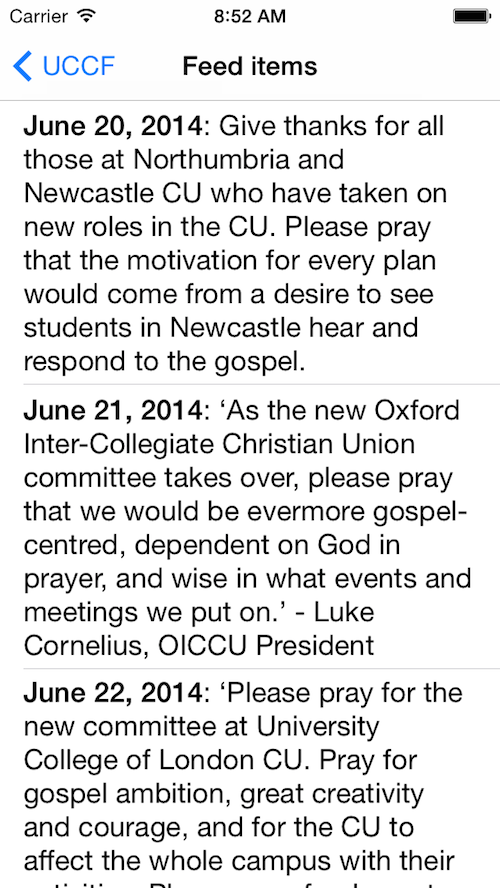 I’ve been resisting this one for years, but it seems that no matter how many ways I try to teach people, most people still don’t realise that you can press and hold on a card whilst you’re praying to open a menu of actions. If you don’t know this menu is there, the app is so much harder to use. So I’ve finally succumbed, and added an explicit button to each prayer card to open the action menu:

There’s plenty more tiny little tweaks here and there. One user commented that it’s a little strange that the “Archive” button should be green when it’s really kind of a negative action. So that’s now orange:

PrayerMate is done as a labour of love in my spare time, but it does cost me real money to keep it all running month by month. Would you consider making a donation towards the work? Click here for details.