The idea that originally inspired me to develop the PrayerMate app was this paragraph from Don Carson’s “A Call to Spiritual Reformation” on how he prays for people:

“The rest of [my manilla folder] is filled with letters– prayer letters, personal letters, occasionally indepedent notes with someone’s name at the top. These are filed in alphabetical order. When a new letter comes in, I highlight any matters in it that ought to be the subject of prayer, and then file it in the appropriate place in the folder. The letter it replaces is pulled out at the same time, with the result that the prayer folder is always up to date. I try to set aside time to intercede with God on behalf of the people and situations represented by these letters, taking the one on the top, then the next one, and the next one, and so forth, putting the top ones, as I finish with them, on the bottom of the pile. Thus although the list of alphabetized, on any day a different letter of the alphabet confronts me.”

If you’re anything like me, you probably have an email inbox full of prayer letters that, on your better days, you read once, but which all too often never really go much further. Long gone are the days when I have a printer anywhere near my email inbox– I had the growing sense that the 21st century needed a digital equivalent to Don Carson’s manilla folder. Thus PrayerMate was born.

Today we’re going to look at two tasks to help you pray more fruitfully for your friends. Firstly, something that everybody can do: adding photos. 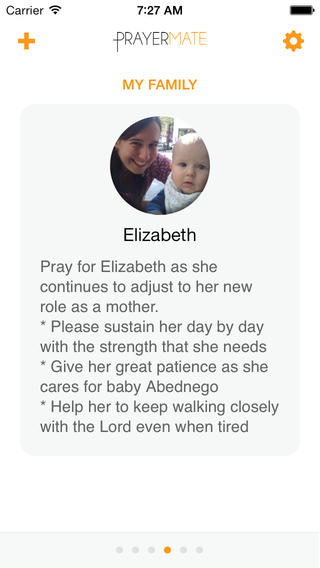 Tap into a subject, and tap the pencil icon to put it into edit mode. If you then tap the circle that appears near the top of the card, you can then pick a photo that represents that person, choose your cropping circle by dragging around and pinching to zoom in and out, and finally hit “Done” when you’re ready. Next time you pray, that person’s face will pop up as a little reminder to help you think of them.

Next, let’s add a PDF attachment. There’s two ways to do this: the most likely route is via your email inbox. If anybody’s ever emailed you a PDF prayer letter, open it up in your email client, then when you tap on the attachment you should get the option to “Open with…” PrayerMate (if you’re on iOS) or if you’re on Android you should be able to find a way to “Share” it with PrayerMate. Track down the subject you want to attach it to, then it will be saved against that subject in the app. Now when you reach that item in your prayers, there’ll be a little “PDF” link which you can tap to open up the PDF full screen.

The other way you can get PDFs into PrayerMate is via the “Import from Dropbox” feature under the “Settings” menu. This will list all of the files in your “Apps/PrayerMate” Dropbox folder, including PDFs (as well as .txt files that you want to import as subjects).

Well that’s it for PrayerMate Amnesty Week. I hope you’ve found it helpful. Now it’s over to you to actually get on and use the app. You might find it helpful to set a reminder alarm under the “Advanced Settings” menu to help you make a habit, but ultimately there’s nothing it can do to overcome a sinful heart. Go well, and don’t forget to join the email newsletter if you haven’t already.