(Please note: this blog post is now very old… and whilst a lot of the information about import and export via Dropbox still works perfectly well, the best way to sync data between two devices is to go to the app’s “Settings” page and tap the “Create an online account/sign in” button to connect via the cloud)

Actually… getting more *IN* to PrayerMate

For many people, one of the things that stops them using PrayerMate more is the challenge of actually getting their prayer points into the app. Typing on a mobile is slow and cumbersome, and perhaps you already have lots of prayers in another system that you wouldn’t want to have to enter all over again.

With the newly released PrayerMate 3.1.0, getting your data into PrayerMate is easier than ever, with a little help from the wonderful Dropbox. Here are three ways that Dropbox can help you.

One key use of Dropbox is to allow you to backup your PrayerMate data, so that you can import it again later in the case of a lost or reset phone, or migrating it to a second device. Under the app’s main “Settings” menu within PrayerMate (accessible whilst praying), hit the “Export data” / “Export to Dropbox” button. Depending on your device, you may then be given the option to export “via Dropbox” or “via another app” – try “via Dropbox” and if that doesn’t work then try via another app instead (and if you have the Dropbox app installed, this should even come up as one of the options). The first time you use it you’ll be prompted for your Dropbox credentials, and then it will save your entire database into a special folder within your Dropbox called “Apps/PrayerMate” as a .json file with today’s date. You can then import this again later, or on another device, using the “Import from Dropbox” button.

When you import, it will look for existing categories and subjects with the same name and reuse them where possible, so in theory you could import more than once without causing duplication. However, it is not going to prove a very satisfying experience trying to use this to continually keep two devices in sync with each other. (Update: this is now live via the “Create an online account/sign in” option in the settings menu). 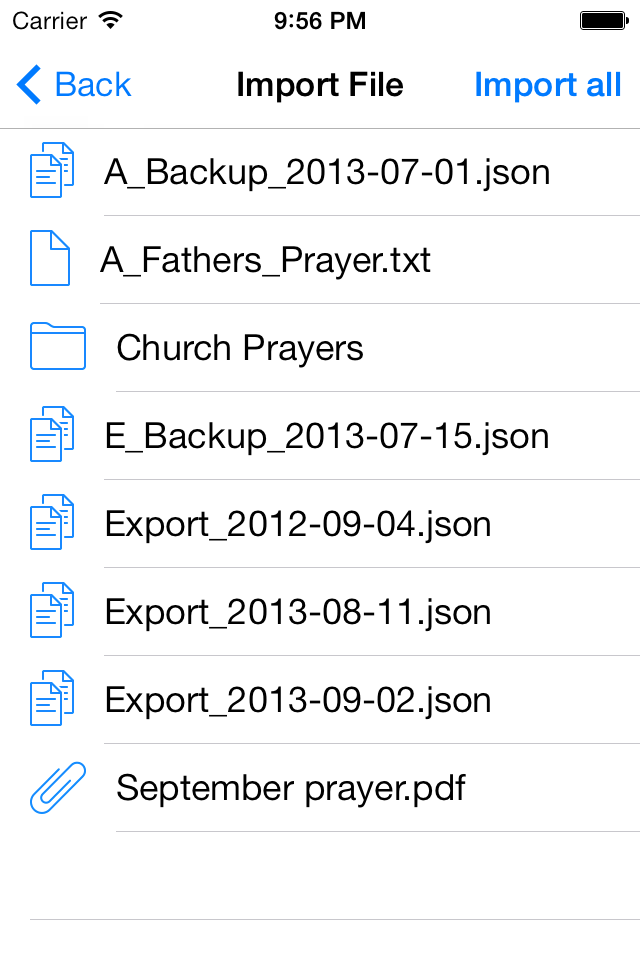 Whilst the first point was all about moving existing data around, Dropbox is also very useful for getting completely new data into PrayerMate. If you place any text file with a “.txt” extension in your “Apps/PrayerMate” Dropbox folder, then you can use that to create a new subject. Hit the “Import data” button under the app’s main “Settings” page, and you should see your .txt file listed. When you tap it, it will then begin the process of creating a new subject with the same name as your .txt file (underscores ‘_’ will be replaced with spaces) and the contents of the text file will be used to populate the description.

There’s also now an “Import all” button. Hit this, then choose one of your categories, and it will load in all of the .txt files in the current directory and create one subject for each. You can create sub-folders within your Dropbox, one per category, if you want a little more control – then just use “Import all” within specific sub-folders.

If you’re anything like me, you’re constantly being sent prayer letters as PDFs that you read once then promptly forget. Now, if you add them to the “Apps/PrayerMate” folder within your Dropbox, when you hit “Import data” you will see those PDF files listed with a paperclip icon. Once you select the file you want, you’ll be asked to pick one of your subjects, and it will attach that PDF file to that subject. When you’re praying you’ll then see a “PDF” button which you can tap to view it fullscreen.